We went to the farmers market opening weekend.  It was so nice.  They have expanded taking over more space and re-organizing it a bit.  So we'll need to get used to the whole extra aisle.  Mouse, Butterfly, and Badger came with me, each with their market bag.  Actually Mouse was using the first one I ever made a felted bag.  He tells me he wants his own.  Another thing on my list.  Several people, including two vendors, asked if I had made them and suggested I get a booth.  Someday maybe! We got kettle corn for the kids to eat while wandering and a cup of coffee for mom.  We looked at everything and danced with the music but only bought a one of raw honey and a bag of dried mushrooms, but we had a wonderful time and handing Jim back half the money I took with me was nice.  We disagree about lots of life-way or political issues but don't let the arguments affect our marriage as each is more important to the other than ideology. (This is more work sometimes and quite easy at others.)  I normally have cash and so having to get some from him for the market did affect what I bought as I know he thinks it is a silly way to get food.


We had dear friends over for games, food and a quick spinning lesson.  They have three daughters the oldest one has a bit of crush on Mouse, the feelings are returned.  Is this how it used to go watching your child play and grow alongside a friend's child until someday they where partners in all things?  I am fully aware that I am well a head of myself with this idea but I expect all mothers wonder what kind of life partner their children will end up with.  She is sweet and smart. The girls and I made cookies, I also made pita chips, curried lentil dip, yogurt cheese with chives, and the most wonderful strawberry cake using the yogurt whey in place of buttermilk.  The was not cool before it was gone.

Sunday, I got up early and went to the gardening center, for Mother's day gifts.  I got each of our mothers rose plant and told them if they wanted the roses came with planting service.  Three years ago we picked up orchids from home depot for them.  Jim's mother likes to tell us that for two years it did nothing and she was sure it was dead, but it has been flowering since.  I also picked up a bunch of stuff for our garden, figuring two trips to the garden store was too dangerous for me.  Not sure that plan helped much as I got 4 grape plants, 2 raspberry, 2 blueberry plants, 2 bag of onion sets, asparagus crowns, rhubarb, and seed potatoes.  So tomorrow (today is finals) will be super get the garden going day. 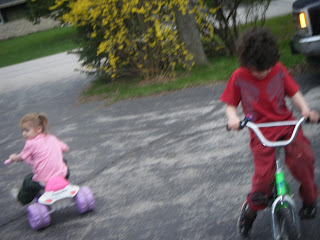 Our parents came over and helped us trim the apple trees.  I had been planning on burning the brush but forgot to get this years permit, so no marshmallows for us.  In one of the trees, we found a woodpecker duplex!  I'll post pictures of all of that tomorrow with the garden transformation!  While the Grandpas helped Jim and me with the trimming the Grandmas watched the kids in the driveway - opposite side of the house from the chainsaws.  Mouse got his training wheels off and rode briefly on his own, but mostly there where too many people in the driveway.

I hope your weekend was lovely and filled with goodness! - Julia
Posted by Julia at 7:51 AM