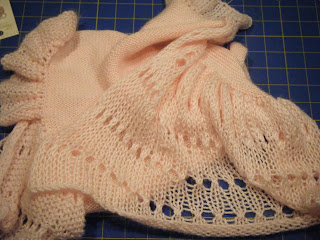 ...well it is pink anyway!  It started as the back off a baby bunting for Badger.  Hahaha.  Size two needles, began two weeks before delivery.  great plan.  So it sat, long past any usefulness for my children.  When one of our friends started a knitting night I went bringing along the pink thing, but it was dull knitting row after row of stockinette while everyone else knitted (and finished) more interesting things.  So to the bottom of the yarn box it went.  I decided I wanted to finish all the projects I start.  This is a huge goal for me and someday means there will be a sailboat built in my yard.  (I have the plans and it has become a family joke!)

Out came the pink thing.  It was not big enough to turn into a shirt with ribbons for straps, so I had to come up with something else.  I was reading Farmama when I saw it!  In one shot, unremarked on or more accurately the focus was on other things, was her little daughter wearing a fuzzy pink shrug.  It looked like a rectangle with sleeves.  Well I had a pink rectangle....  So I picked up stitches on the edge, increased, and switched to a much larger needle.  I played around with making holes and liked the little sleeve I made, so I made another.

Next problem I put it on Butterfly and it looked weird from the front - a sweater that stopped in the armpit!  It worked the first time so... I picked up more stitches and knit away, then did mostly the same thing on the other side.  But it ended up stretching the back panel and made fans of the front.  The upside is it is super soft and she LOVES it.  The downside, it is falling off her. 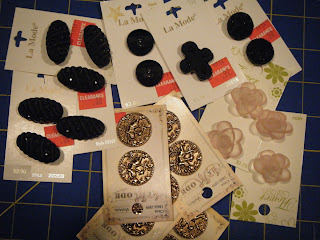 Next plan.  Buttons!  Buttons on the shoulders to hold the fans up and closed and buttons holding a pleat in the back (which might make this last even longer, fingers crossed.)  This also led to a button shopping trip, where we found the buttons to be half price!  And picked up some clearance buttons for two sweaters my Grandma made me (wearing one now) that have been missing buttons forever!

The pink roses where Butterfly's pick.
Posted by Julia at 9:17 PM