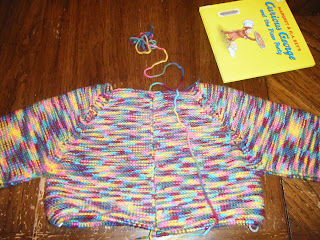 I am knitting with Ginny and the other amazing craftswomen of the yarn along hosted at Small Things, I can't wait to see what everyone is working on.

I am working on Butterfly's sweater.  Finishing the made me feel like I was almost done, now it seems like I will never be done.  I think I have about 4 or 5 more inches until I decrease by three stitches then knit another inch.

I broke my no fiction during the term rule because a book put on hold became available.  The sixth book in the Clan of the Cave Bear series came out in the spring.  So I read it.  I read the first one when I was 12.  Long favorite and long awaited.  Should not have bothered.  Her previous book was poorly edited and often she seemed to forget what she had already told us, with long draggy descriptions that she seemed to insert in multiple placed just to lengthen the book.  Literally the same descriptions.  This one was worse.  Only about a hundred pages or so was given to the characters, the other 600 where used to describe every single cave in France, and not in a way that made you see them in your mind.  The only sign of a plot was literally copied from a chapter in book three.  I am left frustrated and irritated.  I would like to say I won't read the next one, but I said that last time, when I was dating the man who is now my husband of 7 years.   So I put a good book in the shot.  The girls love it.

He is working in Texas this week and I am utterly exhausted.  I miss him.
Posted by Julia at 6:20 AM