He paints miniatures and builds models.  He is good at it. We entered him into the fair competition last summer but I screwed up and he was put into the wrong category. So judging was a bit like 'you painted that?' yes, 'what is it for and are you happy with the job you did?'  not so helpful on constructive criticism idea right.  At the end of fair week when everyone is picking up their stuff, I took it over to the guy in charge of the area where it should've been and asked what I should have entered it into, what was the category number.  He asked Beaver a few questions and told him he was an apprentice on the US Junior Scale Modeling Team.  We have been taking or sending his work all over the US since.  This August his team sent 5 entries to the International Modeling Championship in Swizterland .  One had to compete as an adult as he was 17 and Swiss law required it.  No US junior has ever gotten a medal in international competition.

The boy competing as an adult received a letter of merit, Beaver and two others from his team received silver medals - Beaver was 1 point from gold - and the girl on the team won gold and co-champion of the juniors.  Some of the judges from this are movie set modelers who have worked on really wonderful movies.  They are impressed with my son's work and maybe his team will get a chance to tour a studio and get a private workshop with one of them this spring.  Beaver is so excited and proud, I have caught him running a finger over the medal several times now.  He is dreaming bigger dreams now, I am so proud and happy.  He is starting to believe in himself again. 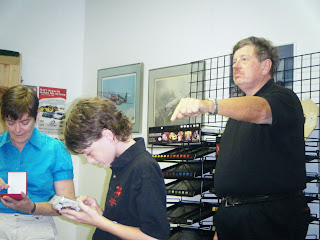 They presented the awards this weekend.
Posted by Julia at 6:04 AM