A bit of this and a bit of that. 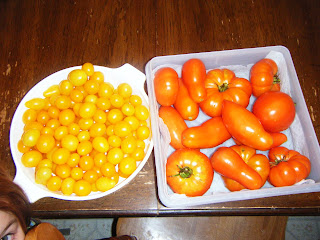 What I found during a stroll in the garden.  That is 3.8 pounds of red tomatoes and 2.8 pounds of yellow cherry and pear type tomatoes.  The yellow ones are yummy and interesting but I wish I had planted some red cherry ones.  The girls are my tomato eaters and they are complaining. 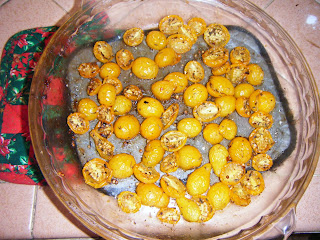 I made the Roma style tomatoes into tomato paste, or at least what I am calling tomato paste.  I roasted them in oil, thyme, salt and pepper, cooked them slowly until no liquid was left then let them cool and ran them through a food processor.  I did the same in batches to about half the yellow tomatoes, too.  My kitchen smelled so good.

I did similar to the other style red tomatoes, but as I wanted sauce, I added garlic, red onions from the garden and oregano.  I also loaded the pan and did not cook them until there was no liquid left.  I now have 10 cubes of yellow  and 12 cubes of red tomato paste and three bags of sauce in the freezer! 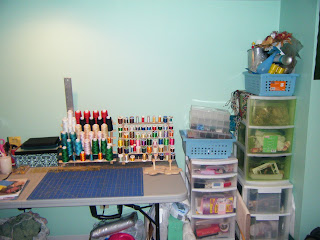 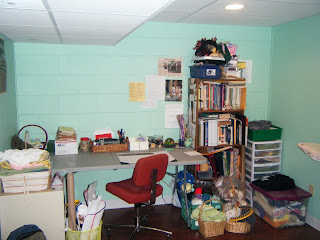 On another note, I got to thinking more about my crafting plans for birthdays and Christmas after the panic subsided. I have not been using my studio for about three months.  Partially, because it was getting on to messy the last time I used it.  Partially, because the last time I used it was a full out panic I waited too long and now it is dig, burrow, toss, drop, grab crafting session time. Partially, because during that last session, both sewing machine revolted and no amount of disassemble or swearing in any language could make them work.  And lastly because mess gathers mess, so in not using it for a few months it had gotten so bad that every time I opened the door I shut it fast. I actually left my machines disassembled under the piles of stuff.

I waded in expecting to never return... or at least for it to take days.  In about 4 hours I had my studio back and found that reassembling the machine produced working perfectly machines, no swearing required. 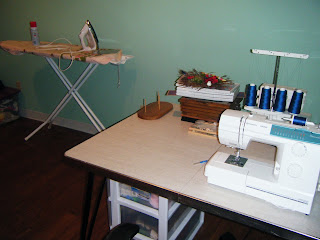 It is not yet the model of organization and efficiency that I dream of but it is ready for work.  I should have taken before and after photos, but I left the garbage can in so you can get an idea.

I turned around and spent a day sewing in it already and made some items for Butterfly's birthday which I will show in another post.  I now feel like the room is full of potential and energy and so am I.

Hope you do something that inspires you today. - Julia 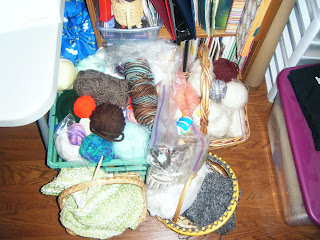