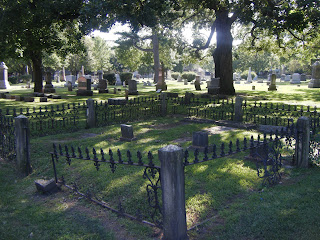 I didn't want to receive.  My aunt called last night, she could not get a hold of my parents.  The hospice my Grandma is in called and told them to come - they live in Colorado Springs,CO &  Grandma is in Cheyenne, WY - Grandma's condition had worsened.  They had just left on Sunday.  Grandma is so much worse and so we are waiting for the next call, too late to fly out for another goodbye, we wait to fly out for the final one.  I finally got a hold of my parents to find the reason the were unreachable is they were stuck in ER determining if the hospital was going to keep Mom again.  My Mom's health has been like this since I was 12, it is awful, but you learn to accept awful as normal.  Dad decided not to tell my mother as the Doctor decided to keep her at least overnight, what would be the point? Her doctor knows what is going on and is hoping to release her today.  I called my sister and told her about both.

Nothing has changed this morning, so I am cleaning house and folding laundry, packing my bags, and tucking my projects away or finishing them quickly.  Hoping to make parent teacher conferences tonight. Wishing it wasn't like this.

Grandma was always they healthiest and strongest of all of us.  She told Mom a month or so ago, that she always hoped to go by getting really sick so she knew it was coming but having enough time to say goodbye to everyone.  Really she has gotten, that wish, in July they told us it would be days... I just want more, I always would have. We lived with her for a while when my father was in the Navy and in a lot of ways she raised my sister and me, hopefully I can be half the woman she is.

I have decided to take the rug I was working on for her before she got sick and bind it off there and send it with her.  I am too superstitious to bind it off before she is gone, and could not work on it again without her and even if I did what would I do with it.

The picture is the grave site of the professor Indiana Jones is supposed to be based on.  I don't seem to have Grandma's picture on my computer.
Posted by Julia at 9:06 AM

Email ThisBlogThis!Share to TwitterShare to FacebookShare to Pinterest
Labels: Grandma