a fun night with the boys. 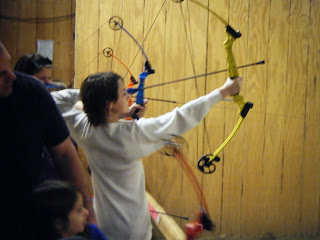 This month's 4H meeting was a trip to a local hunting supply store/archery range.  All the kids got to shoot and have a fun social time for an hour. Beaver has had lesson a few years ago so he did fine, Mouse was kind of funny as he danced around and arched his back way back to pull the string.  The both enjoyed themselves.

I also wanted to talk about a program I watched on tv this weekend.  The Big Waste.  It featured four tv chefs challenged to make a fancy dinner for 100 people out of nothing but food that would go to waste - garbage and unsellable products.  They talked to a bunch of vendors  - stores, butchering facilities, bakeries, fish market, farmer's market, pick your own produce facilities etc.  The amount of food, good perfect food, that was wasted was shocking.  You could tell they were shocked too.  A farmer at a pick own farm talked about people, cutting a plant then seeing a better one and just dropping the first, one of his corn fields had wind damage from the hurricane it was bent but continued to grow, no one coming to the farm would pick it assuming something was wrong with it, they picked bushels and it was all fine.  A butcher gave them 60 chickens, they showed the facilities, the chickens were all healthy looking and only one or two to a cage, the place was really clean, the de-feathering machine apparently breaks the skin or a wing sometimes and then they can not get the bird to sell.  The one chef talked about thinking about her own standards for food and how ridiculous they were and the impact they must be having.  They of course produced a lovely meal and the dinners - mostly food critics and chefs agreed that the food was certainly not garbage.

I have often thought about how canning recipes talk about preserving only perfect fruit.  I disbelieve my ancestors only stored perfect food, I disbelieve that my grandparents did.  My grandpa grew up in the depression in Chicago.  He tells a story of the first day in the air force (he joined at 14) being in the mess hall and seeing all the food they put on his plate and a whole pint of milk to drink, he asked a sgt who he was supposed to be sharing with.  The Sgt told him that it was all for him and if he wanted more milk to be sure to get more.  Grandpa describes it as going to heaven.  We waste so much.  I want to work on the amount of food I waste and appreciate the food we have more.   I think about how fussy my kids are about food, and how wasteful, and how my grandfather would get upset if he offered someone ice cream and they asked what kind.  It was a treat, you wanted some or not you didn't get to pick.  I want to plan out my garden to make the best and most realistic use of my land and talents.  It also means planting things I know they like. Maybe this is stash busting in my brain.
Posted by Julia at 10:21 AM