Joining Ginny at Small Things in the yarn along again today.  I am looking forward to seeing what everyone is working on and reading. 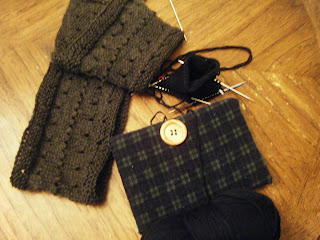 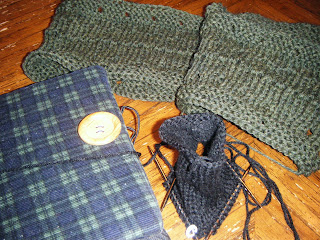 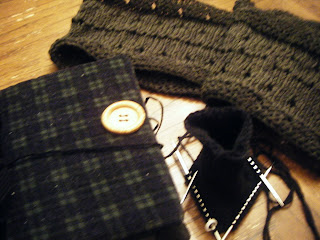 Could not decide which photo worked best so here are all three.  I finished a scarf in Peruvian wool that I bought nearly 12 years ago - before I could knit.  I never made anything with it, so this year I decided to make up a scarf and it would be a nice Christmas present.  Well it will make at least two.  This one is for my cousin Jessica.  I took this project west with me and the night of Grandma's wake, Jess wanted to open the bottle of wine she brought with her while we played cards.  No corkscrew.  Hotel couldn't help.  Mom suggested pounding a key into the cork with a shoe, which we tried.  Then she said "if you had a knitting needle...."  if I have a knitting needle????  I grab mine, which was a circular size 10 with this scarf on it.  I jammed it in and said "Nonnie (pet name for grandma) we need the wine!"  Pop, wine spurting everywhere, cork inside the bottle, house keys still looped on my sister's hands, knitting needle and scarf in mine.  We had a good time hanging out and I thought Jessica would love to have the scarf.  As I have enough for a second one cousin Sean who was also in on this will get one, and I will have to come up with a small something out of the leftovers for my sister and me.

I re-cast on the gloves which are very late for Beaver's birthday.  They are going well, and the right size this time.  Should have done a gauge the first time.  I did ignore the pattern a bit as the cuff was suppose to be garter stitch and I didn't like it so stockinette it was.  He seems to like them and I think I will have enough to do up a matching hat or scarf, for Christmas.

I am between books right now.  The plaid case is the cover I made for my nook.  Really enjoying much more than I expected.  I have read The Evil Inside by Heather Graham, Dracula by Bram Stoker, The Beach Street Knitting Society and Yarn Club by Gil Moneil so far.
Posted by Julia at 11:10 AM

Email ThisBlogThis!Share to TwitterShare to FacebookShare to Pinterest
Labels: knitting, reading, yarn along