Okay I fell into a giant hole titled crazy crafting Christmas despite my intentions not too.  I enjoyed knitting like a manic and read blog posts while doing it.  I got most everything done on time and had the sense to cut items and give up when it was time.  This did not stop me from knitting a scarf for my dad while at my in laws get together or knitting one for my sister's husband while hanging out with them yesterday.  Then, hours before I planned to go home.... I was finished. He liked the scarf and joked about me making his present while talking to him.

He a Jess are only home for a few days but while he was home he found out that he got a job in his field. He has been cutting produce for like a year now just to have a job and while thankful to have employment was really down about spending all that time and money on college so he could chop cauliflower all day.  So Congratulations and we believe in you, Jake!

Back to my empty hands.  I sat for a while. I fidgeted, then I begged Mom for a ball of yarn.  Any yarn, whatever she didn't have a plan for and could toss at me. She laughed and then as I got closer to her stash looked vaguely worried.  She handed me a skein of I Love This Yarn in a bright red, but kept the band so she could get another, so I am not sure what the color is called. I am becoming a yarn snob, but my hands needed to knit...

I cast on from both ends of the skein (without doing anything but grabbing the ends) as many stitches as I could fit on the circular 17's I had with me.  Happy hands.  This morning, I have: 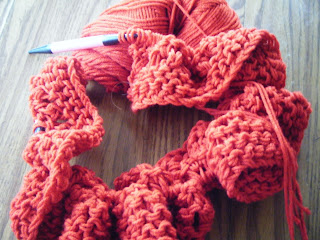 I must admit the yarn is well named. I have not hit a snag (knocks on wood) it is much softer than a cheap acrylic has any right to be and is very very nice. I am knitting a shawl (largest side to smallest) and doubt it will be complete on one skein.

I have baby showers for two cousins coming up so the rainbow shimmer blanket will be back in my hands later in the week.

I am reading Kim Harrison's A Fist Full of Charms, but mostly trying to clean up and catch up on things from Christmas.
Posted by Julia at 12:32 PM

Email ThisBlogThis!Share to TwitterShare to FacebookShare to Pinterest
Labels: yarn along