One of the things I love to do is brew. I make beer, cider, and wine. I am not an expert at any of this but have been doing this for several years now and won first and second place ribbons at my county fair last year. The second was for a Irish red ale another for my bourbon aged cider and the first place for my liebefraumilch wine. We shall see what I can do this year.

I brew with a friend (I'll link her blog when she gets back up) we did a sparkling wine from the grapes -concord- in her yard. and bottled it the week before Christmas. We are calling Baby Wine as we started the day before she found out she was pregnant and bottled a week before the birth of her daughter.  I also started a still red wine from those same grapes this fall.

I made my first whole grain beer this winter as well. It started out tasting mildly of ginger bread and was ready to drink at Christmas. It was alright, with a low alcohol content and a mild but pleasing taste. I am off and running with my second batch, which contains 2 row barley, a Belgium wheat, and a chocolate wheat. I am hoping to find some time to bottle that today.

I have a experimental peach wine going. Seven gallons of well I hope this works, it smells good.

Also fermenting is about 5 gallons of cider from my apples. 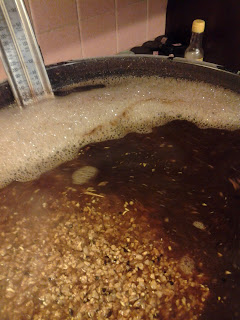 All grain beer at the beginning of cooking. 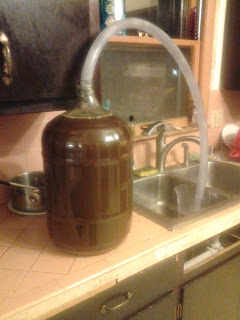 All grain beer fitted with blow off hose for fermentation. As the yeast grows the pressure can cause any lid you use to explode off which is not tasty and a huge mess. Using the tubing (the other end is submersed in water forming a seal for the bottle but allowing the gases a way out) you can not only avoid the scrub ceiling step of brewing but it will take some of the trapped particles left in the beer out. 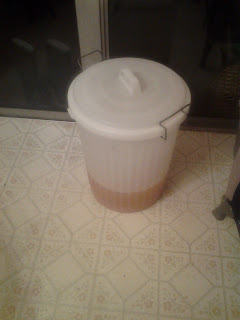 This is a garbage bucket of future peach wine. It got much bigger and was moved to a 7 gallon glass carboy (giant bottle.) 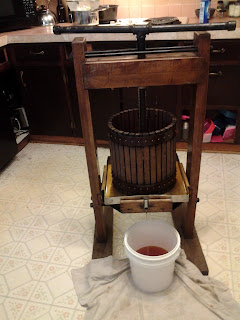 Lovely wonderful press I rented for local brewery store, for pressing out all my apples. I cut them in half and stored them in the extra freezer. I am small scale and getting the press rental in the correct season is difficult, since I have the space I take advantage of it. I really want to make myself on of these though.

I will try to update on brewing more often!~Julia
Posted by Julia at 9:59 AM

Email ThisBlogThis!Share to TwitterShare to FacebookShare to Pinterest
Labels: brewing