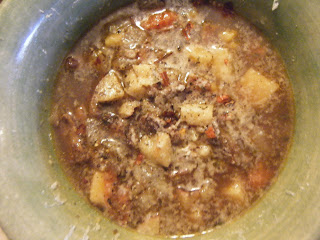 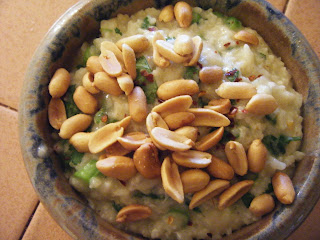 Above is a beef and mushroom soup with Parmesan cheese grated on top. It was amazingly yummy, I made enough to save for two more days lunch but over the course of the day ate all of it. I have no clue why it was so good as I didn't do anything strange, brown the meat and onions, add broth and water, bay, carrots, mushrooms, and potatoes. Cook for awhile. It was tasty.

To the right is what my husband calls 'your rice weirdness' it is based on a Japanese dish a friend made for me. Hers had dashi and a bunch of Japanese specific ingredients. I  make this a bit differently. I prefer to use leftover rice, but you can start with uncooked it just takes longer. I cook the rice in chicken stock and water. I cook it in a lot of liquid and cook it to death. I mean the liquid is mostly gone and the rice has broken down and thickened the soup, think porridge. Then I beat an egg and dumb it in, not stirring the soup while you do it. That seems strange but it works, it further thickens the soup and adds protein, but you don't necessarily end up with bits of cooked egg. Just dump it in and wait a moment then stir. Take it off the heat and add sliced green onion and cilantro, stir them in and serve, top each bowl with peanuts. The first time I made this for my dad -he is a bit picky- he saw what I was doing and said "I thought you said you were making soup not gruel." I laughed and handed him a small bowlful, and said in the tone he used on me as a kid "just try it, if you don't like it you can have something else to eat." That got him. Before I had finished serving Mom and me, he was asking for a full bowl. 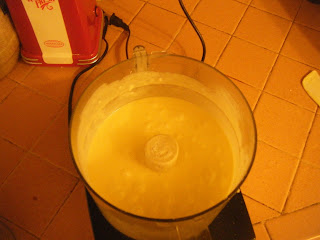 I have been making lots of bread lately. Banana bread, which I make in huge batches from the last forgotten bananas that I tuck into the freezer until I have a stupid amount of, then thaw and make loaf after loaf thinking we can't possible eat this much, I better freeze some, only to have it gone before I can. My kids have no interest in either soup above but can inhale a loaf of banana bread in an eye blink. Ordinary homemade bread, pita bread, Homemade hard rolls to go with the bbq pork Jim made this week.

What are you cooking?
Posted by Julia at 7:30 AM