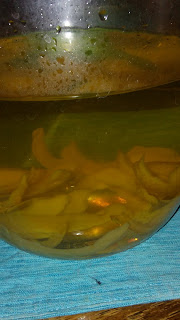 We are going on Wednesday, so the prep has to be done soon. This trip we are expecting 13 people. Mostly everyone does their own food but shares adult beverages and snacks. Jim and I tend to experiment with food. Scratch that. I tend to experiment and He puts up with it and packs extra just in case food. One year I did all 1800's recipes including a rabbit stew (we both thought I could have gotten the same taste with a mix of pork and chicken & saved quite a bit of money,) crackers, and bread. One year I made a bake reflector oven and made cinnamon rolls. One year I did all 1700-1800 drink recipes. The ones that were basically a shot in cider or beer were good, some of the others were very not good. I won't do that as it required too many things and mostly I didn't like the drinks anyways.

This year we have the following and I am experimenting with some stuff at home and planning on doing the hiking trails at the campsite. 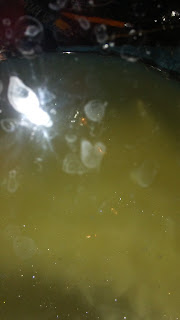 These two are attempts at photographing my horseradish infused vodka. At the top is my lemoncello. I got one large bottle of vodka and split it between the recipes. The lemoncello has sugar, water, and the peals of 5 lemons. I let it infuse for almost two weeks. I used a 8 inch long piece of horseradish grated and the vodka and let it infuse for four days - it smells strong enough to strip paint. I strained and bottled both today, discarding the lemon peal but I ran the horseradish through the food processor and jarred it for later use. 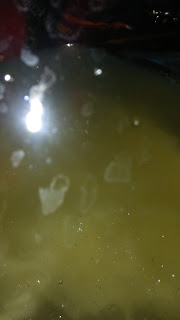 Later today I will be starting on beef jerky and honey roasted nuts. I also plan to make banana bread and chocolate chips to take with, and have two types of home-brewed beer to bring along.
Posted by Julia at 11:52 AM