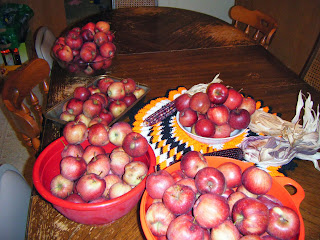 This is how the day started!

I did not move the apples from the below picture onto the table. There are just that many apples.  I worked on apple related projects for the entire workday.

I am waiting for the last batch in the canner to finish so I can go to bed now.  I stopped work at 5 to take Beaver to his dad's for the weekend and visited with my parents - we meet at the halfway point which works out to be near my parents house. 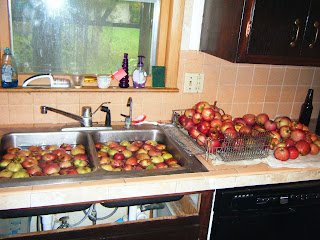 My Dad was helping me to restore a great wheel that Garfield Farm Museum had stored in a barn.  They want to fix them (there are three) up to have volunteers demonstrate spinning on a great wheel. They have the Garfield family wheel in the museum, these were donated at some point. Dad got it working and it looks great. We spent some time working on tension and spinning with it tonight. I need to do some research on better cord splicing methods... but that is another post this one is suppose to be about apples not spinning. It sneaks it's way into all parts of my life. 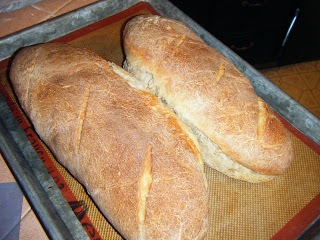 While I was working on apples today I made up these loaves of bread, which I just pulled out of the oven. I used only the yeast left in the bottom of the carboy after bottling a batch of pear cider. It is a sour dough like bread with a faintly pear cidery taste.

I did up apples for jelly - I have near a half gallon of juice.  Most people dump the fruit after making juice for jelly, I don't I mill it and make apple butter. I got 5.5 pints tonight and it smells so good.  I cut and froze apple slice for pie, I am also going to try making pie filling - this is not how I make my pies normally but experimentation is fun, right? I also did spiced apple rings with cinnamon and star anise. This is a new recipe for me and they were so yummy it took serious willpower to not just eat all of them.  I have 9 half pints - side note doesn't hay-pint sound better, like a hay penny - and a half gallon of syrup I will use to make more.

Oh and the apples are still everywhere... I seriously doubt anyone but me could tell any got used - unless I made you carry the compost out - and the trees have at least that much again on their branches. Hoping you kitchen smells as good as mine ~ Julia